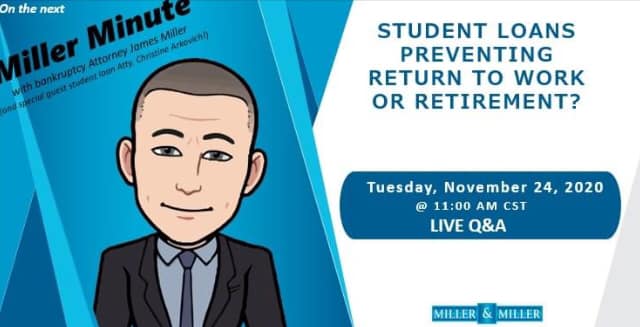 Join us tomorrow at noon EST/ 11:00 CST for a Facetime Interview between Jamie (Miller and Miller in Wisconsin) and Christie (Arkovich Law in Florida) as we discuss why NO ONE should feel compelled to return to work right now, just to be able to pay their student loans.

There are new avenues to say “Goodbye” to both federal and private student loans in many situations!  Things that everyday people and even your average bankruptcy attorney have no idea about!  NONE of these things we are doing for clients right now involve a future Act of Congress.  None.

“A lot of people, even some of the lawyers who represent consumers, thought for years that you really shouldn’t even try because there’s not a chance you’ll win, but I think everyone is looking at it now with sort of a fresh look,” says John Rao, an attorney with the National Consumer Law Center.

Just this weekend, I received a nice plug from Jennifer on Facebook

Best part, I first spoke with this client, a potential referral source as a fellow attorney, in mid May, during the stay at home order in Tampa, Florida.  We had a nice video chat, enjoying some sunshine on my patio at home, and talked about some of the new things we were having tremendous success with, and a few days later, this client, an attorney, hired me for her own loans.  Less than five months later — student loans gone.  All while working from home!

We aren’t new at this.  We’re well known student loan attorneys.  But the things we are doing are starting to get noticed finally!

So tune in, bring a sandwich, and see what we are up to!