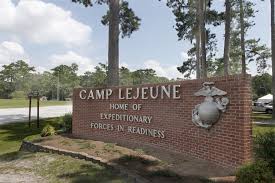 A close friend’s husband was diagnosed with a rare form of leukemia several years ago.  Little did we know at the time that it was quite likely due to his early childhood spent at Camp LeJeune.  I learned that his mother used to mix his baby formula with water which came from the base’s water treatment facility.  No one knew at that time from the early 50s to late 80s, the drinking water supply at the Camp LeJeune Marine Corps base in North Carolina was heavily contaminated with toxic, carcinogenic chemicals.  The levels of toxicity were thousands of times higher than the maximum safe limits set by the EPA.

After many medical procedures and seemingly truckloads of medications later, my friend’s husband, is still among us; however, his life trajectory is much different now.  Same with his family.  A new normal one might say.

I’ve been reading up on the subject a lot over the past few days.  I’ve learned that many, if not most, individuals who have lived at Camp LeJeune at some point in their lives, have not had the opportunity to even try and show culpability or obtain damages for the litany of health problems that have plagued them throughout the many years.  This is because the government typically has sovereign immunity protection where it cannot be sued.  Even when water contamination at Camp LeJeune is expected to be one of the worst cases, if not the worst contamination event in the history of the United States.  Also, how do you prove causation over forty years?

So what has changed?  Well, President Biden is expected to sign into law the Camp Lejeune Justice Act within a couple weeks.  The bill has already been passed by the House and Senate.  This Act will grant veterans and others who were exposed to contaminated water at Camp LeJeune, the ability to file a lawsuit against the U.S. Government for their injuries.

The Act waives sovereign immunity.  It waives the statute of limitations which normally would bar suit for claims that span over decades.  It will address culpability — by putting into place a causation presumption, so expensive doctors will not be necessary to prove a claim.

That’s it.  Stay tuned for the exact information needed to file a claim – we will be posting about that as soon as we know for certain.

Once a claim is filed, they will likely be joined together in a class action to be filed in North Carolina for victims located throughout the country.

How to get involved?

Please reach out to us by filling out the short intake below or by emailing info@christiearkovich.com.  Tell us your story.  When did you live or work at Camp LeJeune?  If you have had unexplained health issues, let us know that.  Similar to our BP Oil Spill clients, we are working in conjunction with class action attorneys to get claims timely and correctly filed.  We’ll have a Q&A up on our website shortly after the law is passed and we know a little more about the claim requirements.