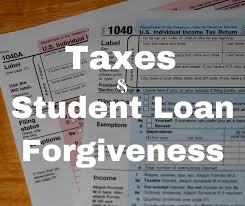 We’ve received questions about how exactly did the recent stimulus bill affect student loan forgiveness and any resulting taxable event?  Here is the actual text of the change in law below.

As you can see this includes any taxable forgiveness of federal or private student loan debt.

So the time to settle student loans is now, or at least before January 1, 2026.

SEC. 9675. MODIFICATION OF TREATMENT OF STUDENT LOAN FORGIVENESS.
(a) IN GENERAL. — Section 108(f) of the Internal Revenue Code of 1986 is amended by striking paragraph (5) and inserting the following:
‘‘(5) SPECIAL RULE FOR DISCHARGES IN 2021 THROUGH 2025.—Gross income does not include any amount which (but for this subsection) would be includible in gross income by reason of the discharge (in whole or in part) after December 31, 2020, and before January 1, 2026, of —
‘‘(A) any loan provided expressly for postsecondary educational expenses, regardless of whether provided through the educational institution or directly to the borrower, if such loan was made, insured, or guaranteed by —
‘‘(i) the United States, or an instrumentality or agency thereof,
‘‘(ii) a State, territory, or possession of the United States, or the District of Columbia, or any political subdivision thereof, or
‘‘(iii) an eligible educational institution (as defined in section 25A),
‘‘(B) any private education loan (as defined in section 140(a)(7) of the Truth in Lending Act),
‘‘(C) any loan made by any educational organization described in section 170(b)(1)(A)(ii) if such loan is made —
‘‘(i) pursuant to an agreement with any entity described in subparagraph (A) or any private education lender (as defined in section 140(a) of the Truth in Lending Act) under which the funds from which the loan was made were provided to such educational organization, or
‘‘(ii) pursuant to a program of such educational organization which is designed to encourage its students to serve in occupations with unmet needs or in areas with unmet needs and under which the services provided by the students (or former students) are for or under the direction of a governmental unit or an organization described in section 501(c)(3) and exempt from tax under section 501(a), or
‘‘(D) any loan made by an educational organization described in section 170(b)(1)(A)(ii) or by an organization exempt from tax under section 501(a) to refinance a loan to an individual to assist the individual in attending any such educational organization but only if the refinancing loan is pursuant to a program of the refinancing organization which is designed as described in subparagraph (C)(ii).
The preceding sentence shall not apply to the discharge of a loan made by an organization described in subparagraph (C) or made by a private education lender (as defined in section 140(a)(7) of the Truth in Lending Act) if the discharge is on account of services performed for either such organization or for such private education lender.’’.
(b) EFFECTIVE DATE. — The amendment made by this section shall apply to discharges of loans after December 31, 2020.

When is private student loan settlement an option?

Once a loan is considered in default and a servicer is willing to listen to settlement offers (which is usually 6 months or longer of missed payments), you can make an offer to settle.  We generally will send an offer accompanied by a letter of hardship and a legal argument or two as to the unenforceability of the loan.  These arguments are usually that the debt is beyond the statute of limitations, the lender cannot prove it is the party who can legally enforce the debt, bad record keeping and one of our favorites – non-qualified education loans are dischargeable in bankruptcy.

This will hurt your credit.  But, after our work is done, you can rebuild your credit — and now you’ll have a better debt to income ratio because the private student loan will be no more.  If you or your co-borrower are about to buy a house, refinance a house, or purchase/lease a car, it is usually best to do those things first if your credit is strong enough, and then negotiate a settlement on the private student loans.

Settlements do not have to be a lump sum payment.  They can be, but most of our settlements are paid via installments over a period of years, usually 2-5 years.  Usually at no interest.  So every dollar you pay toward the settlement amount will go toward reducing that reduced principal.  Many times, there is no other way to end a private student loan because of the high contractual interest rates.  Wouldn’t you rather be done with your private student loans in less than five years, rather than paying on them forever?

And right now is a good time because of the waiver of the taxable event that debt forgiveness usually entails.

Settlement will also stop those collection calls.  We can send a cease and desist representation letter to the lender which will stop all calls by federal and state law.  From that point on, the debt collector must deal with us, the lawyers in all communications with you.