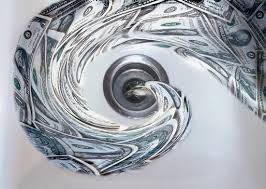 “Ten Years of Garnishment Down the Drain”:

In this series of Real Life Examples, I would like to highlight a potential client who came to us after ten years of wage garnishment at $400 a month.  They were upset that the loan balance had not gone down at all, but rather actually went up.  To top if off this client works for the local school system and would be eligible for Public Service Loan Forgiveness (PSLF) had they not been in garnishment.

We put together a plan to cure the default, put them on the best income based plan for their family with an estimated payment of $167-$324 depending upon how they file their taxes and how many children the borrower claims on his tax return as dependents.  And they will be enrolled in the PSLF program which will allow for a full discharge of any loan balance including unpaid and accruing interest after ten years.

What happened to the prior $400 a month that was garnished for ten years?  Well it kinda went down the drain.  Yes, it was applied to the loan balance, but it merely serviced the interest that was accruing, it was not enough to actually pay down the principal.  What happened to the ten years of public service from 2007 – 2017?  Well that time is also down the drain.  Time in default does not count, even if you are being garnished.  This client will have to work another ten years under the income based program to be eligible.

Had we heard from this client back in 2007, they would have likely paid around $200 a month for ten years and they would have been done now.  Completely done – zero balance owed.  How much is that advice worth?

Well $200 a month savings for the past ten years is $24,000.  Plus the loss of whatever else they could have done with that money.  And now another ten years of roughly $200 a month until the PSLF kicks in.  This client could have saved over $50,000 if when they first received the notice of garnishment they had taken the bull by the reins and called for some legal advice.  Instead they felt that it would be paid off eventually through the garnishment.  I get that.  But with the high cost of interest, this type of plan is more likely to backfire.  It took them ten years to reach out for help when they finally realized that the balance wasn’t going down, but actually was going up.  Nearing 50 years of age, with two children, they finally decided it was time to seek help.

The moral of this story is:  have a plan.  Don’t count on the system working for you.  Just because you are paying the student loans “something” is not a plan.  Figure out what you are paying for and what the end result will be.  Take control of your student loans!  If you don’t have the time to do it, then hire a student loan attorney to help you at minimal cost for maximum results.

For more information on how to take control of your student loans, please see our website at Christie D. Arkovich, P.A. or schedule a free consultation with us.