We started a video series this fall with attorney Melissa Solevilla at Carey, Leisure & Neal, about issues facing our grown children, and how to help them get a good start in their lives.  I’m thinking about his now, when I have consult coming up with a former NFL athlete who was involved in an auto accident which was not his fault!  The other driver had some insurance, but very little.  So who pays for the $400,000 in medical bills???!!!  Take a listen below to hear our tips on easy things you can do to avoid such traps. 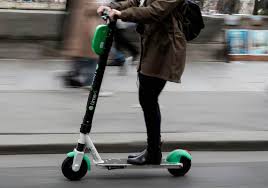 After having moved my parents and in laws to South Tampa’s SOHO district to be close to us, I can’t help but notice all the E-Scooters appearing there and in downtown Tampa over the past year.  Please be careful when riding these.  At least wear bright colors and a simple bike helmet if you can.  These two steps alone would drastically reduce the vehicle versus E-Scooter problem out there.  And wave if you happen to see my 78 year old mom riding around town!  Not too likely, but you never know.

Riding an e-scooter is an excellent way of getting around. They are small, fast, and flexible. They allow riders to avoid congestion and save time by not having to find a parking space. However, the benefits of using an e-scooter do not come without dangers.

E-scooter accidents are on the rise throughout the United States. The quick and agile motion of e-scooters can throw off inattentive automobile drivers. E-scooter riders are also put in danger by the reckless and irresponsible.

END_OF_DOCUMENT_TOKEN_TO_BE_REPLACED

In a long awaited decision by the Florida Supreme Court, Estate of Michelle Evette McCall v. U.S., No. SC11-1148, the damages cap provided in the Tort Reform law from a few years back was ruled illegal as it violated the Equal Protection Clause of the Florida Constitution.

Although this opinion is limited to wrongful death noneconomic damages, it is likely that some trial courts will apply this Court’s reasoning to personal injury medical malpractice cases as well.

Because of the limits for noneconomic damages, it became cost prohibitive for plaintiff’s personal injury lawyers to seek relief for someone too young or too old to work. Why should those persons be entitled to any less than someone fully employed?

END_OF_DOCUMENT_TOKEN_TO_BE_REPLACED

Texting + driving = bad things happen. My husband, a twenty year veteran DUI officer in St. Petersburg, Florida shows me gruesome car accident photos now and again that help keep me in line. As a result, I run less red lights that still look orange to me, and I try to avoid certain behaviors while driving, including texting.

But I was surprised to learn that texting while driving is much much worse than drinking and driving. Did you know for instance that the five seconds you look at your phone to read or write a quick text, amounts to a football field of distance going 55 mph.  I use the excuse that I only text at red lights or I pull over. But really, how many times do I finish typing or reading the sentence I started, while I accelerate when the light turns green. It would not take much more than a second or two for a pedestrian or bicyclist to move in front of me while I’m still looking down foot pressed against the accelerator. I am also very guilty of writing three words or less while driving. Still takes five seconds to do that. Meantime a football field has passed by.

Be a good example for your kids. 48% of young people say they see adults regularly texting while driving. That’s no different than getting drunk off your &^% and getting behind the wheel. In fact it’s eight times worse according to statistics.