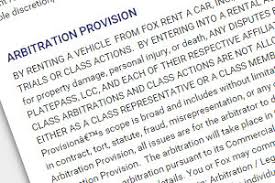 It’s simple.  If you are wronged, you should be able to pick the forum to go after the lender, bank, student loan company, credit card company, car rental company, credit bureau, you name it — and that forum should include the local courthouse and not just arbitration.  The CFPB recently ruled that mandatory arbitration clauses in the fine print of your contract is wrong.  Now Congress wants to repeal that rule.

Call Your Senators; Tell Them NOT to Take Away Your Day in Court Against Big Banks.

For too long, Wall Street lawyers and lobbyists have used a secret tactic, fine print contracts, to take away Americans’ constitutional right to go to court. After more than five years of studying and working on the problem, the Consumer Financial Protection Bureau issued a rule to restore our right to join together and hold big banks and lenders accountable in court for unlawful behavior that rips us off and puts the American economy at risk. When financial bad actors are not held responsible for their bad behavior, disasters like the Equifax data breach and Wells Fargo fake-account scandal occur.

Some in Congress want to take our rights away – again! Tell your Senators to support the CFPB arbitration rule and to reject the resolution, S.J.Res.47, that would repeal the rule. Call your Senator: (202) 224-3121.

Forced arbitration is an abusive practice in which corporations hide “ripoff clauses” in the fine print to stop consumers from suing them in court. Instead, banks and lenders choose a private arbitration firm to decide the outcome and then pick what rules apply and how much it will cost consumers – with no real opportunity to appeal a bad decision.

The widely supported rule would ensure that we can band together in court against systemic and widespread financial misconduct, such as when Wells Fargo, Equifax, and others rip us off with reckless or illegal practices.

The CFPB’s proposal is a crucial step to ensure American constituents, such as servicemembers on active duty, can fight back when they face financial fraud and abuse.

My name is ____. I live in [STATE], and I urge Sen. _________to support the CFPB arbitration rule and oppose any Congressional Review Act resolution (S. J. Res. 47) that would repeal it. Forced arbitration clauses and class action bans block Americans’ day in court. The CFPB rule restores our constitutional right to band together. The rule restores the right of servicemembers to enforce laws that protect their financial wellbeing when they are on active duty. I urge the Senator to support the rule and vote NO on the CRA.

Wall Street lobbyists are fighting tooth and nail to repeal the rule. We must fight to keep the critical rights that finally have been restored. Thanks for joining the fight.

For Florida our U.S. Senators are: